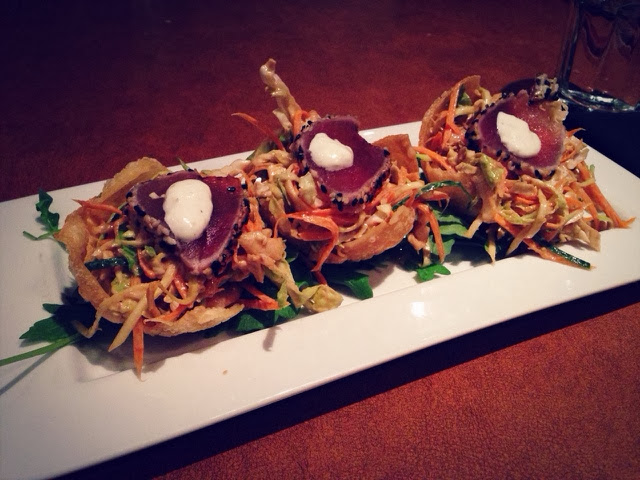 The Ahi Tuna Wontons are always a hit for me - as such, I almost always order these when visiting Smash. Seared Ahi Tuna is one of my favourite ingredients. The Ahi Tuna Wontons are crunchy (due to the wontons), savoury (due to the asian slaw), and finger-licking good (overall). The asian slaw is peanut buttery and reminds me of Thai cuisine. The seared tuna is a refreshing change, though I wish the pieces were slightly larger as they tend to disappear in the mass of delicious asian slaw. If you ever visit Smash, I highly recommend trying this out. 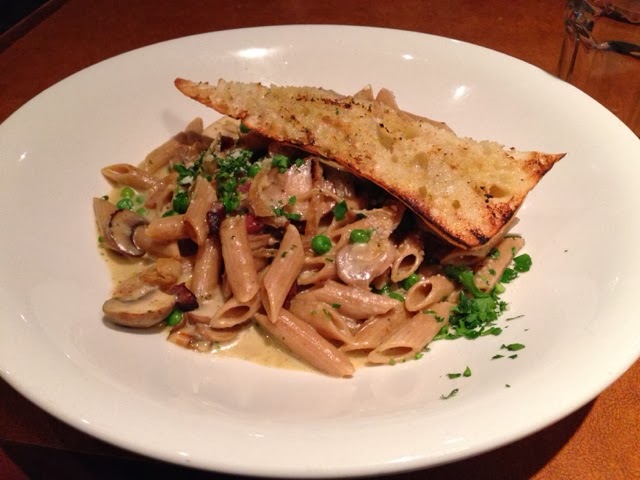 Normally, the mushroom linguini is not made with penne (as pictured). However, my favourite pasta is penne so I asked for the substitution. My friend Fontaine & I have been doing this for quite sometime ( since my birthday last year - its my birthday again! Birthday pasta!) - though we haven't visited Smash within the last few months. Prior to this visit, the penne was not whole wheat - and it was good - hence why we continued asking for this substitution. Unfortunately, the sauce does not agree with whole wheat penne. Mushroom "Penne" was sadly disappointing this visit as the sauce and the pasta did not coexist in harmony and the pasta was slightly undercooked (and I am for one who enjoys their pasta slightly structured). It would have been appreciated if more peas were added to have their presence more well known on the plate. More so, we arrived at 7:45pm and we were not served our food until 8:45pm. Despite being starved from waiting for our food the Mushroom "Penne" sadly arrived lukewarm and hunger could not cover the bland taste. Granted that this is not the regular menu item, Smash lists whole wheat pasta as an option for an additional $2 - so it would be expected that they should be able to perfect the harmonization of whole wheat pasta with the sauce (my suggestion: more sauce - and perhaps slightly thicker/creamier - to sufficiently coat the pasta). 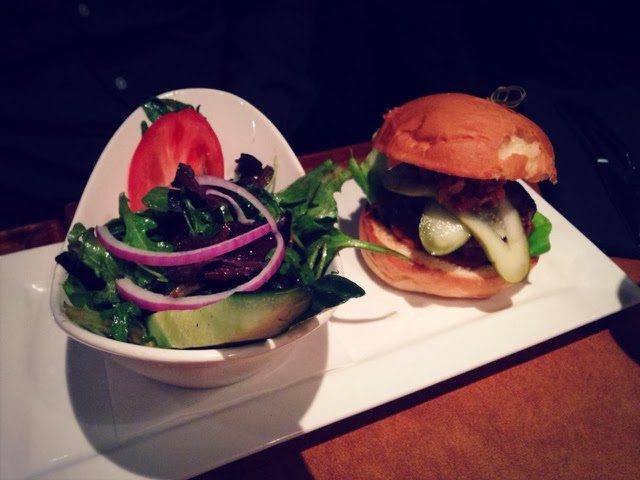 
Luckily, the boys enjoyed their burgers. There were no complaints from them and they were happily sedated though they did complain about the wait. 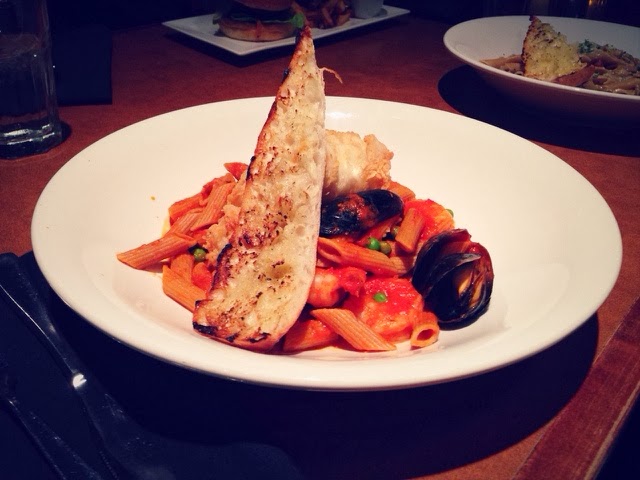 The "Seafood Penne" is also a "custom ordered" dish that is not part of the menu. On the menu it is listed as Seafood Risotto. My friend Joey was also disappointed with her meal as it also came warm, but she felt that the pasta was bland and equated it similar to a college student's first time cooking tomato sauce pasta. Granted that it's not a regular menu item like Fontaine's and my Mushroom Penne  - it's expected that pasta should be able to cooked well for $16-$22 a dish. 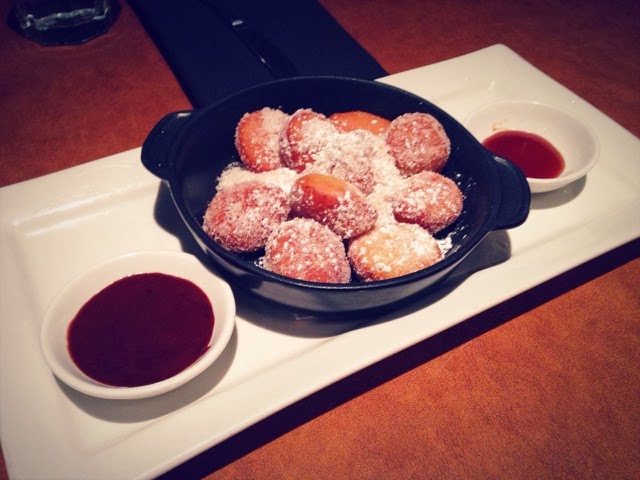 We had difficulty ordering the donuts as the waiter did not come by our table to ask us about dessert after our meals. We had to flag down a busgirl to find a waiter who would take our order. Nonetheless, Fontaine & I are restaurant-doughnut fanatics and enjoyed it. We didn't use the chocolate sauce but enjoyed the caramel sauce option. Fontaine commented on how little caramel sauce we received (right) as it was only good enough for a few doughnuts. However, it was already difficult enough to find the waiter so we just ate the rest of the doughnuts with the excess of cinnamon sugar (which we appreciated). 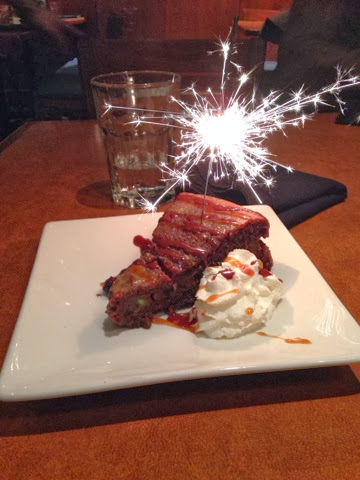 Thank you to the waiter gifted me with this complimentary birthday cake! The gesture is very much appreciated. I shared my cake with all my friends and all of them really enjoyed the cake. They commented it was moist, tasty, and just the right amount of sweetness. Personally, I enjoyed it - but in moderation. I throughly enjoyed the first 2 bites I had - but afterwards it became slightly overwhelming for me and I was glad I had friends to share the cake with. I was surprised with the whole banana chunks within the middle of the cake - but personally I felt the cake was overly moist (to the point it was slightly mushy/pudding like).

I considered myself a long time, devout visitor of Smash Kitchen. My family has been regulars to it's predecessor, The Bluestone, for as long as I could remember (so at least since age 10 or earlier) and have developed a relationship with some of the wait staff, especially Cliff who is an exceptional waiter. Cliff still waits at Smash during the day and to this day he still remembers my favourite drinks and menu items. My family (specifically my father's sister's family) has been visiting Bluestone/Smash every Sunday (for brunch) for as long as I could remember. They also used to go once a week for dinner. When Smash first opened, we were happy with the quality of the dishes as the ingredients were fresh and the flavours were created in perfect harmony with each other - and accepted Smash as our new regular spot.

However, recently we have felt that the quality at which the dishes have been made has declined and my aunt has stopped visiting Smash regularly for half a year now. My family would prefer to go another restaurant than Smash now. My cousin has gotten sick from the food on more than on occasion (after writing off the first experience as a fluke) and my aunt & uncle has complained of non-fresh ingredients being used. Even my parents commented on the decline of Smash's quality.

Despite their warnings, I have continued going with my friends. When I introduced my friends to Smash last year during my birthday, they were excited about the quality of food they were getting and even requested to go to Smash for dinner on more than one occasion. Having never experienced my cousin's family's woes, I have never doubted the consistency of Smash's food and service. As such, I booked a reservation for my birthday again this year. Needless to say, its saddening to leave from your birthday dinner a disappointed with the food and wishing that you went to a different restaurant to celebrate. Understandingly since we requested substitutions, I understand that the food may not be as par with its regular quality. However, since only the type of pasta was altered it was a disappointment and questionable why the pasta was not cooked to the usual quality. It almost felt like the food was prepared "cheaply" by an inexperienced chef. How hard is it to make pasta? Also, although the service was friendly, my friends and I were seated in the back of the restaurant with little attention. The initial dinner order not taken for 15-20 minutes. Food took at least an hour to arrive and when trying to find a waiter to bring cheese, order dessert, or request more caramel, none was to be found until busgirl cleaning up a table walked by and was able to flag down a waiter for one of the 3 requests. The manager/owner came around to greet us after the last doughnut remained - but by this point there was nothing he could have made the meal go better. I didn't want to comment about my disappointment in front of my friends. However, on the way out of the restaurant, it seems like my friends won't be requesting to go back anytime soon. For my birthday next year, I will be looking for a new restaurant.

Overall, I am thoroughly disappointed with this particular visit to Smash. Perhaps it was the wait & the substitutions that made the visit a little unenjoyable, though I feel at the $15-$30 entree range such small substitutions should not be an issue. Since my family members have had these complaints prior to this visit and reading some of the other negative reviews on Smash, for the prices I would much rather prefer to go to Milestones or some other establishment where the quality and service is more consistent. Although after this visit I feel adverse to visiting Smash again, I may still visit Smash in the future (as the Ahi Tuna Wontons hold a special place in my foodie heart). However, if the quality of the ingredients are not improved in my next visit, I will most likely not return to Smash.