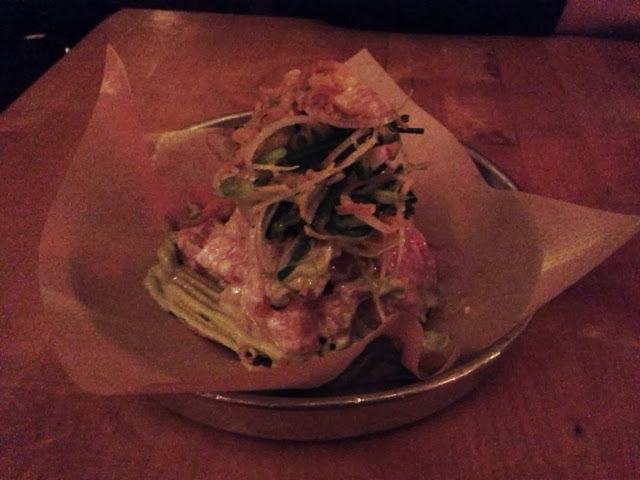 Words cannot be used to describe how delicious this Tuna Ceviche was... It was so amazing, that we ordered a second dish! The Tuna Ceviche also tasted phenomenal with the pita chips from the Guac & Chips! Since no description is provided on the blackboard or Grand Electric's website, it tasted like seared white tuna marinated in a creamy white sauce (possibly sour cream?), with lemon/lime juice, thinly shredded turnips, and onions. It was delicious. My mouth is drooling writing about it. 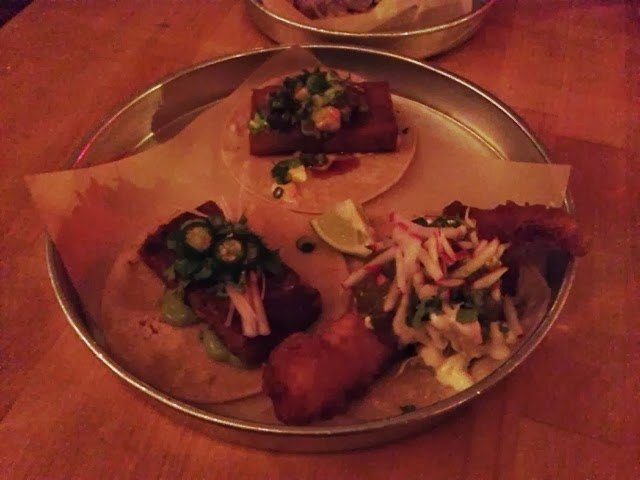 I throughly enjoyed all three tacos. I couldn't really pick a favourite of the three since they all were delicious - I really enjoyed trying the Scrapple Taco since it was my first time trying scrapple. For those who don't know what it is, Scrapple is a mix of pork scraps mixed with cornmeal! The Baja Fish Taco was battered well - light, crispy, and buttery - and not too thick. All three tacos were scrumptious, moist, and extremely flavourful. Eventually, I hope to try all the tacos (ie: the Crispy Cauliflower Taco!) 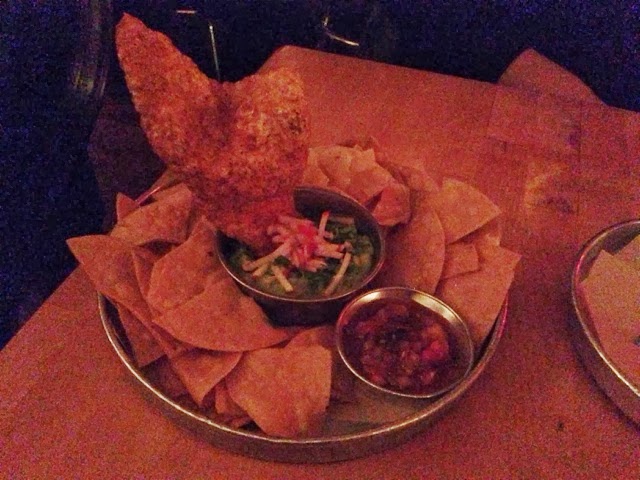 Even a simple dish like Guac & Chips, Grand Electric managed to hit the nail right on the head! I believe the chips were made out of pita and the large wedge stuck in the guacamole was a fried pork rind wedge. Both the chips and the rind were amazingly delicious. The rind was crispy and light. The guacamole was perfectly balanced - all flavours were apparent and did not over power each other (as some guacamole have an overpowering onion or cilantro flavour). The salsa was great as well - substantial enough that it wasn't watery and not that spicy.

Despite the huge hype, Grand Electric surprisingly exceeded my expectations! It took me a couple months before I was able to cross Grand Electric off my hit list, but I'm glad I did (and wish I did so sooner!). I was expecting Grand Electric to be extremely Mexican, but in my opinion its not really that Mexican. At most, I would say its because of the tortillas in the tacos, that Grand Electric would be classified as Mexican. If anything I would classify Grand Electric as comfort food. The food is delicious and leaves the stomach very happy. I throughly enjoyed my meal and despite the tacos being on the small side, both Mike and I left full! We were lucky arriving at around 8:30pm and having to wait for approximately 15 minutes as I heard the line can get quite lengthy at times. The one complaint I have with Grand Electric is that the music is very loud and a tad too dim. I wouldn't recommend this place for a date (due to the loud atmosphere) but it's a great place to check out with friends (and its relatively cheap!).